Most of the work we do on-board revolves around an instrument package called the CTD, which we lower from the ship to the seabed. I wanted to write a bit about how we use the CTD because the data collected from it underpins the majority of the science we do. The CTD is a collection of sensors surrounded by a ring of bottles for sampling water. CTD stands for Conductivity (used to measure the saltiness of the water), Temperature and Depth. Most research cruises are structured around a series of sites, called stations, where the ship stops and the CTD is lowered through the water. The location of these stations depends on the scientific targets and often repeats previous cruises so that we can look at changes over time.

The various sensors collect the conductivity, temperature and depth data continuously as the CTD descends and ascends, and wealso close the bottles at depths of our choice to trap water and bring it back onboard the ship. Once the CTD is back on deck a team of dedicated and beautiful samplers tap off water into smaller bottles. On this cruise we are taking water samples to measure concentrations of chlorofluorocarbons (CFCs), carbon, the DIMES tracer, oxygen, nutrients, barium and the salinity.

The screenshot below shows a typical profile of data that has been collected on the CTD’s journey through the water. Depth (from the surface to 4000m) is on the vertical axis. To put this in perspective, think of somewhere 4 kilometres or 2.5 miles from where you are now and imagine that distance vertically – that’s a lot of water. The coloured lines represent some of the variables that are measured continuously by the sensors on the CTD. Shown here are temperature (red), salinity (blue) and dissolved oxygen (yellow). The green line is fluorescence, which tells us about how much algae are photosynthesising. Ocean water isn’t all one homogenous mixture. Instead, different parts have different properties depending on when and where they formed. We call these different bodies of water ‘water masses’.

For a bit of detail about why the wiggly lines wiggle as they do at this particular station see the panel below. Remember, this is just one station (station number 55 in the south east Scotia Sea) – the profiles look different in different places and at different times of year. 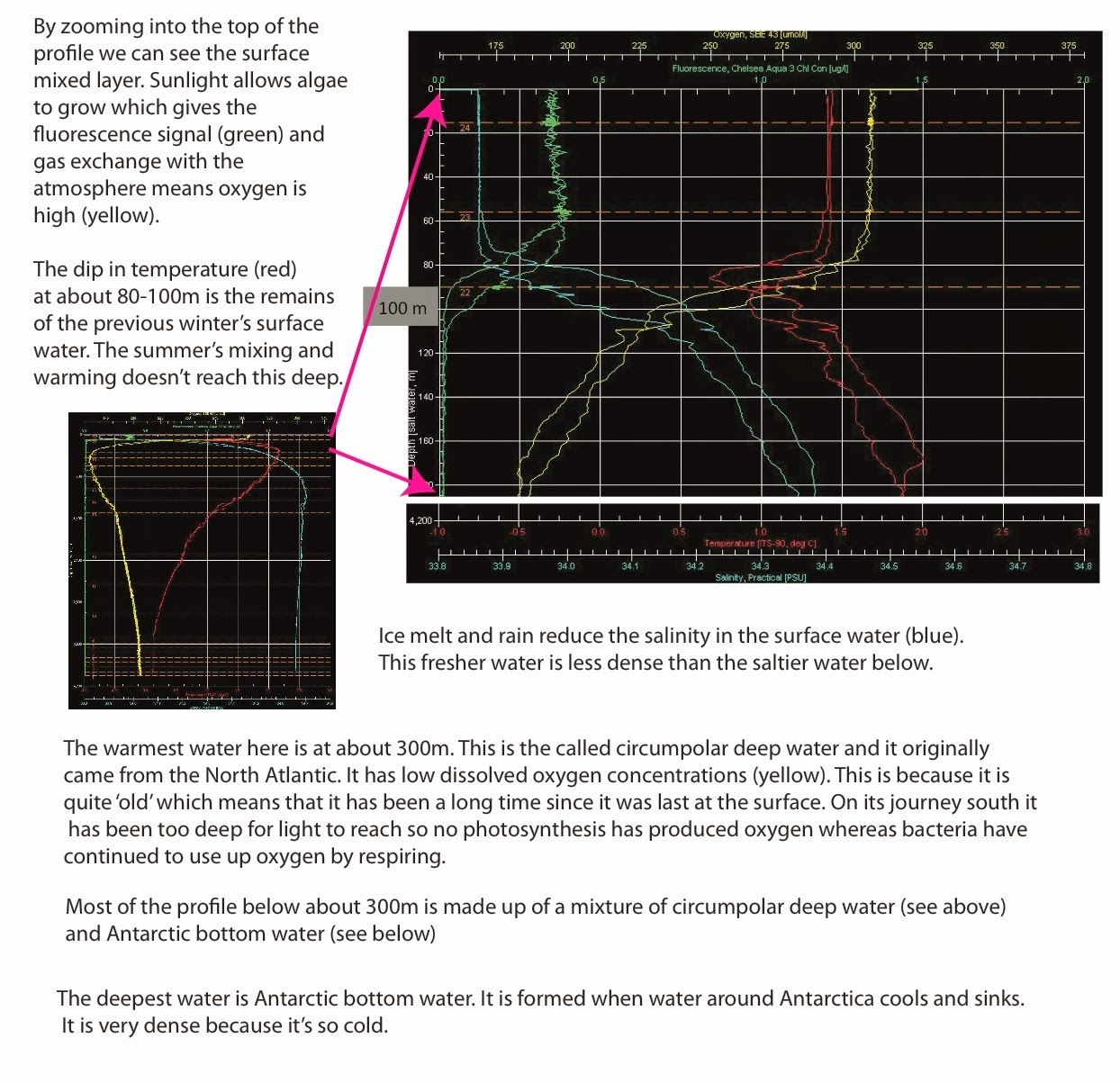