Greetings from the frozen edges of the Weddell Sea! Today we’ve all been experiencing the chills and thrills of finding ourselves back amongst some truly spectacular Antarctic scenery, as the ship steamed into extensive sea ice for the first time this cruise. Our mission: to recover a set of moored scientific instruments that have been anchored close to the sea bed for the past three years. During that time they’ve been recording information about the temperature, pressure, and salinity of the water, as well as measuring the direction and velocity of currents, to add to a ten year time series. The battery life of the moorings is only four years, so it’s our job to scoop them up and discover what exciting new information they have to tell us about the movement of water in the Weddell Sea.

The iced over forecastle of the JCR. With temperatures starting at -14degC and dropping to -22degC by nightfall, stepping outside today has required more than just a thick jumper. Many thanks to Ollie for braving the cold to get the wonderful photos for this blog post.

We started the day at a comparatively balmy -14 ºC, with the sea surface temperatures hovering just above freezing (which for sea water at the surface is -1.8 ºC). This large temperature gradient between the air and the sea causes the air close to the sea surface to warm and pick up moisture. As this air rises and cools, the moisture re-precipitates a metre of so above the water, an effect known as ‘sea smoke’, which creates an amazing, slightly eerie view in the morning light. As the day progressed we had a perfect opportunity to pass through the various stages of sea ice formation and growth, as the air temperature steadily plummeted and we made our way southwards.

In these conditions, the sea surface steadily loses heat to the colder air above, and eventually patches of it reach -1.8 ºC and begin to freeze. These small initial patches of sea ice act as buffers; they damp down the waves and reduce mixing at the sea surface, enabling larger areas of surface water to cool down to freezing point. As the very surface layer of water freezes it forms ‘grease ice’ which, as the name suggests, looks like a floating layer of oil or grease. This layer then compacts together into ‘frazzle ice’, and as the temperatures continue to drop, this compacts again into circular patches of thicker ice, appropriately known as ‘pancake ice’. 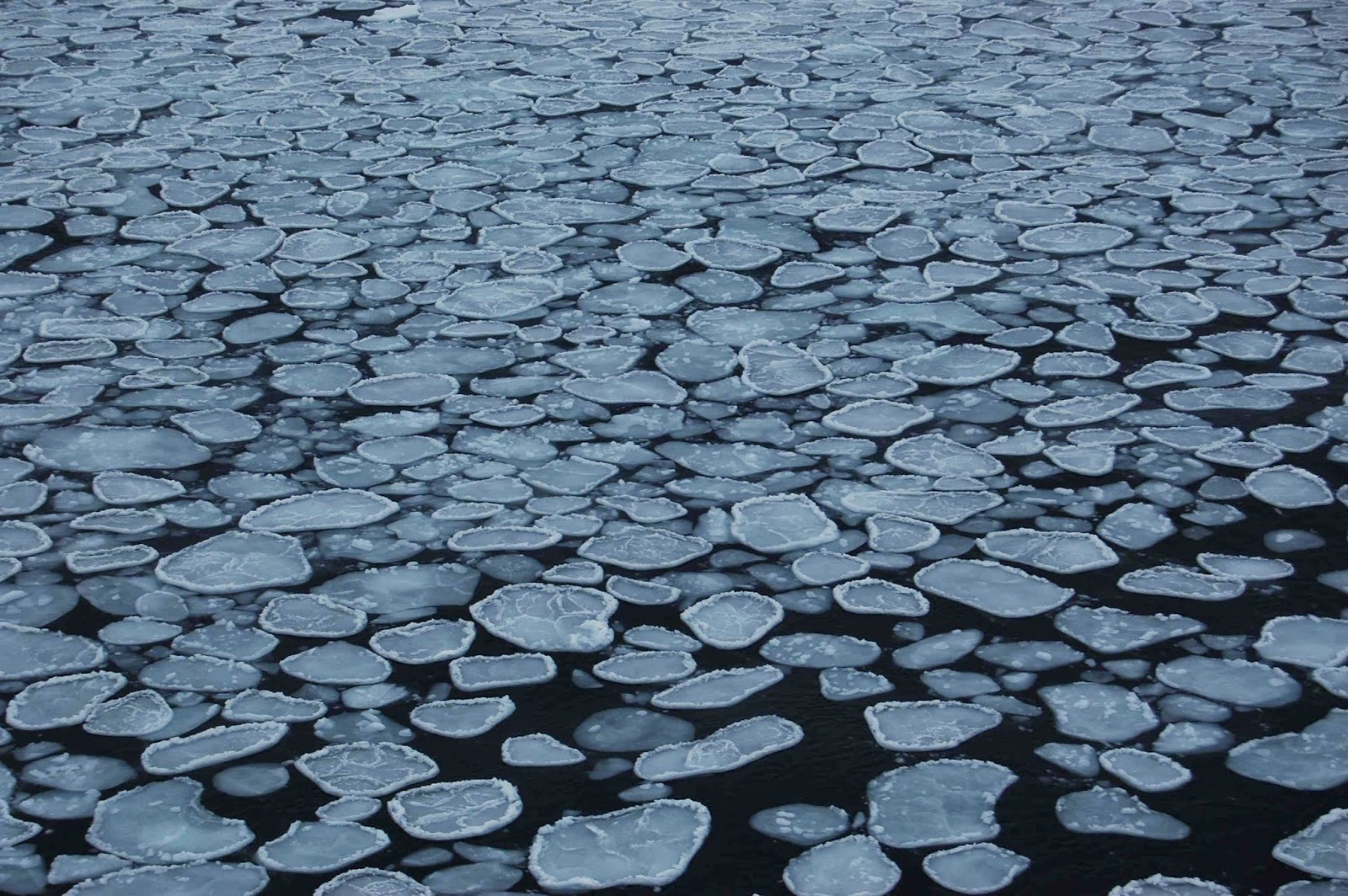 By lunchtime we were steaming through a stunning landscape of pancake ice, punctuated here and there by larger, blocky icebergs. These blocks are the accumulation of several years of sea ice that have grown each season with the addition of fresh snowfall. Keen-eyed Andrew spotted some blocks that were at least twelve years old; a bit like tree rings, you can tell the age by counting the layers of snow accumulation, with every layer representing a winter of growth.

Sea ice also is also a great environment for Antarctic wildlife. The ship has had a constant escort of Snow and Antarctic Petrels, and every now and then groups of Adélie penguins could be seen diving from larger floes of pancake ice. But what we were really looking for as we scanned the horizon with our binoculars was the tell-tale orange and yellow buoys that would mark the location of the moorings. Phil, our intrepid onboard moorings-master, had sent out a signal to the first set of instruments earlier in the day, instructing them to cut the wire that anchored them to the seafloor, and causing them to float up to the surface. After a tense half an hour or so the buoys were spotted sandwiched amongst the ice floes, and some excellent manoeuvring from Jerry and Phillipa up on the Bridge soon had us alongside. A little sophisticated grappling-hook action later (courtesy of our wonderful Bosun Dave - no mean feat in temperatures of -19 ºC with 20 knot winds whistling across the deck!) And the first mooring was safely onboard.

But our mission isn’t over yet – a second mooring still awaits collection further to the southeast, in an area of the sea much more thoroughly iced over. The floes of pancake ice that we’ve been encountering all day are steadily growing, sticking together and compacting until they form continuous sheets of pack ice. Even the ice strengthened hull of the JCR can only get us so far in conditions like these, so everyone’s keeping their fingers crossed that the ice around the second mooring won’t be too thick, so that we’ll be able to get in to retrieve it.

In the meantime, even the most Antarctic-seasoned scientists and crew are enjoying the beautiful views afforded by traversing these icy waters, from a spectacular sunset over the ice, to a breathtaking starry night sky. Definitely worth bundling up in an insulated boiler suit (the height of polar fashion) and daring the -22.6ºC for.
Posted by Unknown at 04:31