It’s Tuesday evening here on the RRS James Clark Ross. The CTD is currently in the water, having been lowered on a wire and winch to about 3700 m. With 24 bottles poised to snap shut on as it returns to the surface, capturing seawater from lots of different depths, and bringing back lots more samples for us to analyse.

Unfortunately things haven’t been running quite so smoothly for the VMP-team…one of the instruments conked out due to a problem with the computer board or ‘brains’ of the instrument. After a day on the tech’s operating table, we realized that we didn’t have the spare part needed to get it up and running again. However, it’s not all bad news as we do have a second ‘back-up’ instrument.

VMP stands for vertical microstructure profiler, and it is the instrument (often referred to more succinctly as ‘the yellow-bog brush’) that measures how turbulent the seawater is. We have two types of VMP instruments on board – an untethered VMP and a tethered VMP. Despite not being attached to the ship (and therefore more likely to get lost!), we tend to use the untethered VMP because it can reach much deeper in the ocean – up to 6000 m compared to 2000 m for the tethered instrument. These deep mixing observations are particularly important for DIMES because it is near the seabed where deep currents flow over underwater mountains and cause lots of mixing and turbulence. 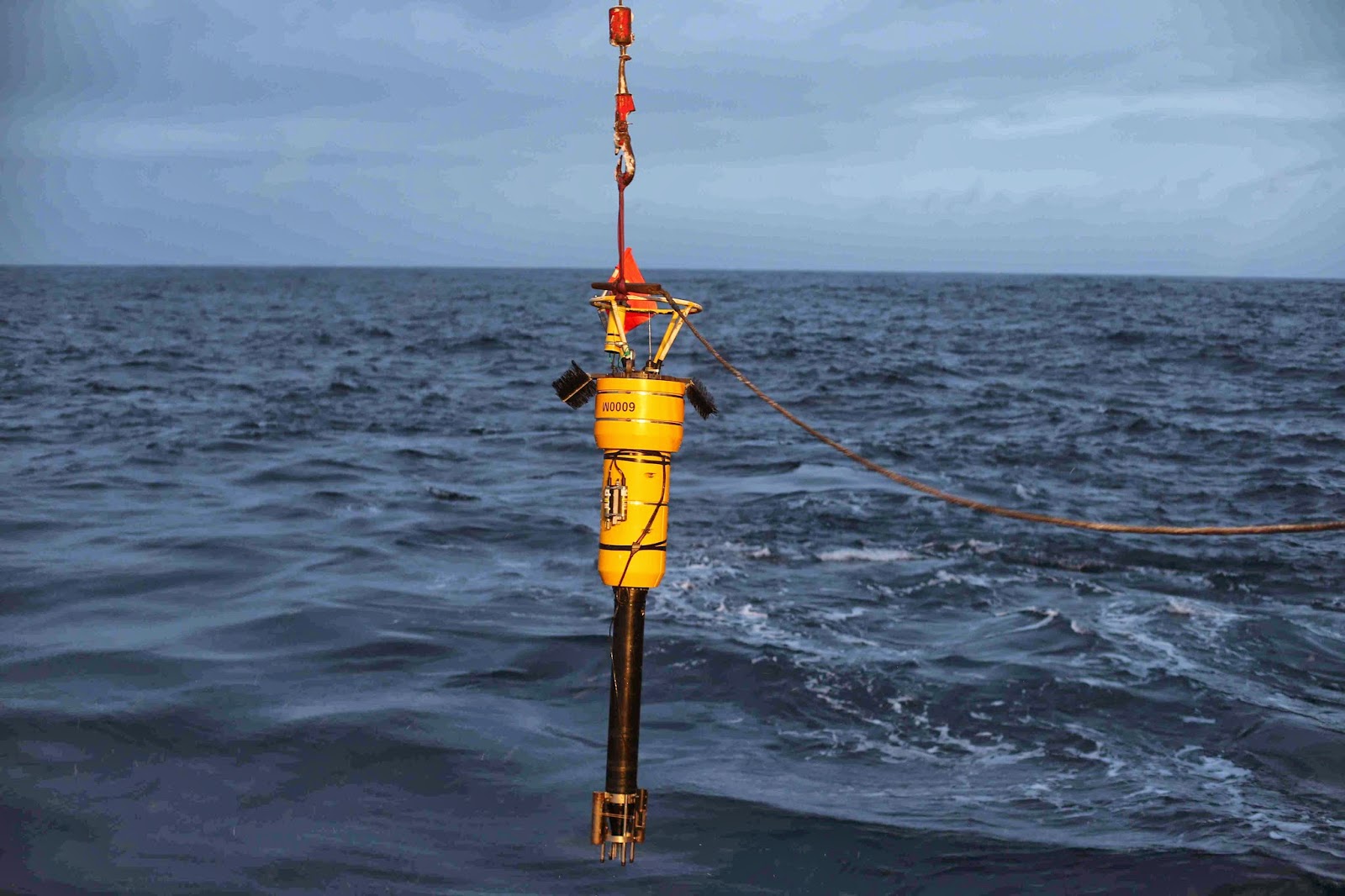 The untethered VMP is deployed – when in the water, the rope and hook are released. The probes, which face downwards into the water, are protected by a metal cage, which also holds two iron weights. The yellow casing provides buoyancy whilst most the electronics are housed inside the black tube. The two brushes help the instrument to fall at the correct speed (photo by Richard).

The nose of the VMP instruments host very sensitive probes, which measure fluctuations in temperature and velocity of the surrounding water. From these data we can quantify how vigorously ocean is being mixed up and stirred on tiny (i.e. cm) scales. The probes act a bit like the needle on a record player – picking up tiny variations in the ocean, and playing us back a story about the small scale physics which are going on. Whilst the tethered instrument is always attached to the ship by a strong wire, the untethered instrument is left to it’s own devices. Once deployed from the side of the ship, it slowly sinks because it is ballasted by two heavy iron weights. We program the instrument to drop these weights at a chosen pressure (depth), after which the VMP becomes buoyant and rises back to the surface. It’s sometimes a bit tricky choosing a release depth. Some information about how deep the seabed is can be gleaned from an echo sounder on the ship, and we also use the surface current direction and strength to predict where and how far the profiler will drift. A whole cast takes about 3 hours. Once the profiler pops back up at the surface, we steam towards it, hook in back on board and download the data. A red flag, flashing light, radio communications, and often a curious flock of albatrosses all help in spotting it after a dive.


There are several reasons why mixing in the Southern Ocean is of interest to the scientists. As well as heat exchange between the oceans, this mixing brings nutrients from the deep ocean to the surface – nutrients needed by phytoplankton (or tiny plants which live in the surface of the ocean). In addition to being the base of the ocean food chain, phytoplankton plays a key role in the Earth’s climate system. Like land-plants, phytoplankton remove the carbon dioxide generated by burning fossil fuel carbons from the atmosphere and lock it up in the deep ocean. Ocean mixing also affects the global concentration of atmospheric CO2 because the rate at which it is taken up by the ocean ‘sponge’ is sensitive to the rate at which deep and surface waters are exchanged. Measuring all these factors will help to quantify the rate of climate change. The VMP mixing data also complements the data from the DIMES tracer nicely - it provides 'on-the spot' estimates of the vertical mixing present in the ocean, in contrast to the time and space averaged values determined from the yearly spread of the tracer (dye).